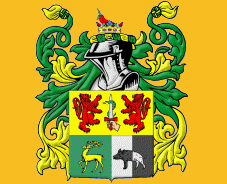 Welcome to the Sullivan family's website. This site is all about my branch of the Sullivan family, originating from the marriage of Thomas Sullivan and Mary Sheehan, who both came from Ireland in the 19th Century. Unfortunately myself and my sister are the last of the Sullivan's in our line, with our father being an only child. Within these pages I have explained a bit about my family and gone as far back as I can to my Great-Great Grandparents. At the moment I can't go back any further than this, though there maybe someone out there who can help. If you can help me research the Sullivan's in Cork(?) and the Sheehan's in Limerick and/or you know of anyone who can help then please contact me. Click here to download my GEDCOM file.

The name Sullivan or O'Sullivan in Irish is O Suileabhain. The derivation of the name is in dispute amongst scholars, though there is no doubt that the root word is suil, meaning 'eye', but whether it is to be taken as one-eyed or hawk-eyed must be left an open question. Sullivan is by far the commonest surname in Munster and comes third in the list for all of Ireland. Almost 80% of the Sullivans (or O'Sullivans) in Ireland today belong to the counties of Cork and Kerry, the remaining being mostly in Co. Limerick, or the city of Dublin. Thus the Sullivans are still concentrated in or near their ancient homeland. It wasn't until after the Anglo- Norman invasion that the Sullivans came to the fore, their origins being illustrious. Descended from Eoghan (Owen) Mor, the father of the famous Oilioll Olum, they were with the O'Callaghans, the MacCarthys and the O'Keefes. Some of were Lords of a territory near Cahir prior to the invasion: from 1200AD onwards they are to be found in the extreme south-west of Munster.

There they became very numerous and powerful, dividing into a number of branch septs of which O'Sullivan Mor and O'Sullivan Beare were the most important. The former had his principle castle at Dunkerron on the shore of Kenmare Bay, the latter was lord of the modern baronies of Beare and Bantry. Thought seldom appearing in any of the Annals before 1400, they were prominent in the sixteenth century. Outstanding at that time was Donal O'Sullivan Beare (1560 - 1618), hero of the siege of Dunboy and the capture of Dunbly. His nephew Philip O'Sullivan Beare (1590 - 1660), was a soldier in the Spanish Army but is better known as a historian. His Historiae Catholicae Iberniae Compendium recounts the events of the Elizabethan wars as told to him by his uncle and other participants.

From a junior branch came Col. John William O'Sullivan (b. 1700), close companion of "the Young Pretender" in his Rebellion of 1745. Since his time the name has been made famous by many Sullivans and O'Sullivans. In the field of literature Owen O'Sullivan (d. 1800) was one of the best eighteenth century Gaelic poets. Humphrey O'Sullivan (1780 - 1837) kept a most interesting diary in Irish which has been partially published by the Irish Texts Society. The bothers A.M. Sullivan (1830 - 1884), and T.D. Sullivan (1827 - 1914), as well as being authors of note, were leading Nationalist M.P's the former being a Young Irelander in 1848. On the stage Barry Sullivan (1821 - 1891) and Charles Sullivan (1848 - 1887) were celebrated actors and Maureen O'Sullivan is famous today in the same field. While Sir Arthur Sullivan (1842 - 1900), of the Gilbert & Sullivan operas, was of Irish descent. If we add, from a very different arena, John L Sullivan (1858 - 1918), perhaps the best known pugilist of all time, we have recorded but a small amount of the Sullivans of note to be found not only in Ireland itself but on both sides of the Atlantic.